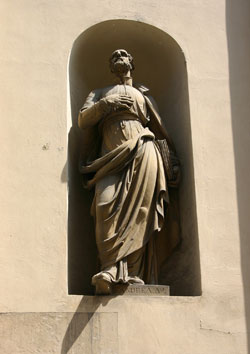 Theologian, founder, and friend of St. Charles Borromeo. Born in 1521 at Castonuevo, Sicily, and baptized Lancellato, he took the name of Andrew as a Theatine monk. A devoted young man who was also very handsome, Andrew studied in Venice and in Naples, being ordained and receiving a Doctorate of Laws at the age of twenty-six. He served in the ecclesiastical court in Naples until he realized that he was capable of lying in order to win a legal argument. His remorse led to his retirement from the court, and he was commissioned by the archbishop of Naples to reform a lax convent in the city. He was attacked by a group of men who opposed this reformation and was taken to the Theatine monastery to recuperate in safety. Andrew entered the Order of Theatines, which had been founded just a few years before by St. Cajetan. After completing his novitiate, Andrew visited the shrines of Rome, returning to Naples to become the director of novices for the Theatines. He also founded several new Theatine monasteries, serving as superior in some. St. Charles Borromeo learned to depend on Andrew's wisdom in affairs of the Church. He also wrote treatises and preached. Andrew died on November 10, 1608. He is a patron of Sicily and is invoked against sudden death. He is buried in Naples.