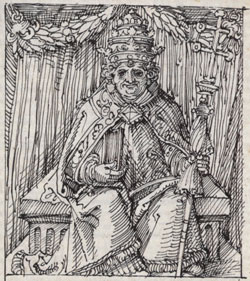 John IV John IV, (d. 642) a Dalmatian by birth, was the son of Venetius, whom scholars believe to have been a Byzantine official in Ravenna. John was an archdeacon at the time of his election to the papacy (640), and as pope, he condemned Pelagianism and monothelitism. He also condemned the Celtic church's practice in calculating the date of Easter. John defended Honorius I's interpretation of the wills of Christ in a letter to Emperor Constantine III because John believed that the clergy in Rome and in Constantinople had failed to understand Honorius' reasoning properly.