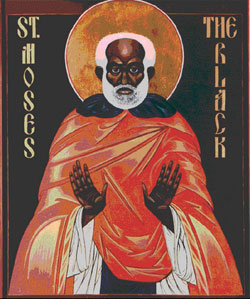 A man known for his strength and ferocity, St. Moses was an Abyssinian slave and was released because of his nature. The leader of a gang of thieves, Moses sought refuge at Sketis, where he was converted to Christianity. There he became known for his supernatural gifts, and his wisdom is included in the sayings of the Desert Fathers. Theophilus of Alexandria ordained him to the priesthood. When Bedouins attacked Moses c. 395/400, he offered no resistance; he was buried at Dair al-Baramus, the Monastery of the Romans, in the Valley of Natron. His relics are now in the Church of Al Adra (the Virgin).