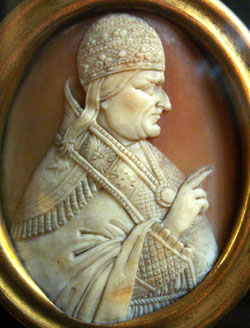 Honorius IV A grand-nephew of Honorius III, Giacomo Savelli was born c. 1210 in Rome and studied in Paris. Urban IV made him a cardinal in 1261. Savelli was elected pope in 1285 and took the name of his great-uncle. Although he favored mendicant orders, he condemned the Apostolics, who preached evangelical poverty, the year after his election. Persuaded by St. Raymond of Peńafort, Honorius encouraged the study of Oriental languages at the University of Paris in the hope that greater knowledge of them in the West would repair the schism with the Eastern Church and would facilitate the conversion of Jews and Arabs. He hoped also that Sicily would become a papal fief. Crippled by arthritis, Honorius died in 1287.