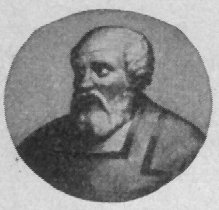 Honorius II Lamberto Scannabecki, who was pope from 1124 until 1130, was born near Imola in the province of Bologna. He was appointed cardinal bishop of Ostia in 1117 and played a role in negotiating the Concordat of Worms, which ended the lay investiture issue in Europe. When he was elected pope, he took the name Honorius, and he supported Lothair III's attempts to become king of Germany. Louis V of France made peace with the papacy, and the English court again allowed the pope to send legates. In 1128, Honorius blessed the rule of the Knights Templar. In spite of a wish to end Norman influence in northern Italy, Honorius was forced to recognize Roger II of Sicily as Duke of Apulia.