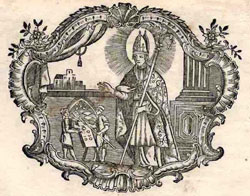 Merchant slain by his own servants at Parthenay, Poitou, France. Honorius was a cattle merchant who discovered that his servants had robbed him while he was away. They killed him, and he was immediately venerated as a martyr. He was canonized in 1444 and is called Honorius of Buzancais  in some lists.