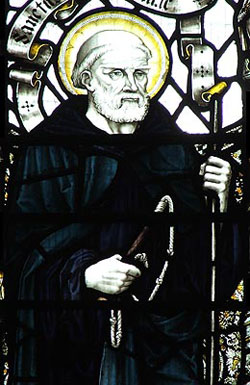 Guthlac Born into the tribe of Guthlacingas and probably related to the royal house of Mercia, St. Guthlac (c. 673- 714) served in the army of Ethelred of Mercia for nine years before becoming a monk at Repton. When he took his vows, he restored a third of his war spoils to his victims. His sister Pega became an anchorite. In 701, Guthlac also became an anchorite on an island in the marshes of Lincolnshire. Attacked by Britons and tempted by demons, Guthlac was rescued by St. Bartholomew, to whom he had a special devotion. The fish and the birds (except the crows, who were the most abundant birds in the area) loved St. Guthlac, who died in 714. A vellum roll, called the Guthlac roll, is a pictorial biography of the saint. The site of his hermitage became a monastery, Crowland, which was a frequent place of pilgrimage until the Reformation.