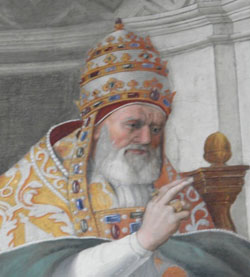 Gregory IX The reign of Gregory IX (1227-1241) was marked by conflict between the pope and Emperor Frederick II. The nephew of Innocent III, Ugolino de Segni was born in Agnani and studied at Paris. A friend of St. Dominic and of St. Francis, de Segni was the cardinal protector of the Franciscans and an advisor to St. Clare of Assisi before his election to the papacy. In the year of his election, Gregory excommunicated Frederick for failing to lead a crusade. Although Frederick led the Fifth Crusade (1228-1229), the pope was reluctant to reconcile with the emperor and readmit him to communion. The peace of Germano in 1230 restored relations between the two, until 1235, when Frederick accused Gregory of allying himself with the Lombards. Gregory excommunicated Frederick a second time four years later. Two years after that, Frederick laid seige to Rome, and Gregory died during the seige.