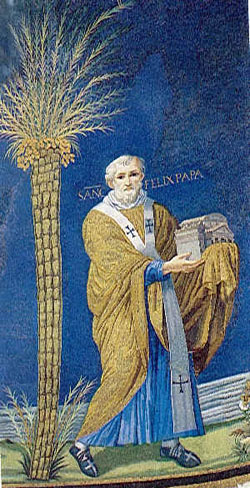 Felix IV Elected pope in 526, St. Felix IV was the candidate of King Theodoric, whose daughter Amalasuntha allowed the pope to judge clergy who were accused of misconduct. Felix turned a pagan temple into the church of Sts. Cosmas and Damian. In 529, he sent twenty-five chapters on grace and free to Cćsarius of Arles. The Second Council of Orange accepted them as a condemnation of semi-Pelgianism and as a confirmation of the teachings of St. Augustine. Felix died in 530 and was buried in the portico of St. Peter's.