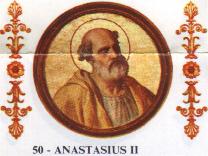 Pope from 496-498. Anastasius II became pope during the controversy over the Henotikon, an expression of monothelitism which was accepted in Constantinople and rejected in Rome. In an attempt to heal the schism, the pope sent legates to Emperor Anastasius and offered to accept baptisms and ordinations done by Patriarch Acacius if his name would be dropped from the diptychs. At the same time, Theodore of the Ostrogoths sought the throne of Italy from the emperor, who said he would grant it if Rome accepted the Henotikon. Many Roman clergy broke communion with the pope over the proposed reconciliation. Anastasius died shortly after his failure to reconcile the Roman clergy to tolerance of monothelitism. Many saw his death as a swift serving of divine judgement. In spite of that, Anastasius was buried in St. Peter's.