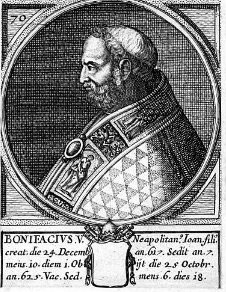 Boniface V Born in Naples, Boniface V was elected to the papacy in 618; however, he was not enthroned until 619, when Emperor Heraclius delegated the confirmation of papal elections to the exarch of Ravenna. An excellent organizer, Boniface reorganized the Italian states after a series of wars, and he made ecclesiastical laws about behests conform to similar civil laws. Boniface established churches as places of asylum and encouraged the growth of Christianity in Northumbria. During his reign, Muhammad proclaimed Islam, and Emperor Heraclius fought the Persians, who had conquered the Holy Land. Boniface died in 625.