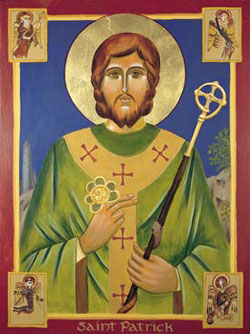 Celestine I The founder of the papal diplomatic service, Pope/St. Celestine I was born in the Campania and served as a deacon under Innocent I. Elected pope in 422, Celestine confiscated the property of Novationite churches and restored a basilica in St. Mary Travestere after it had been damaged in Alaric's sack of Rome. Although Celestine confirmed the appointment of Nestorius to the see of Constantinople, the pope opposed Nestorius' teachings and supported Cyril of Alexandria in the conflict between the two patriarchs. Celestine also combatted Pelagianism and semi-Pelagianism in southern Gaul and in England. He is supposed to have sent Palladius to evangelize Ireland in 431. Celestine died in the following year and was buried in the cemetary of Priscilla.

Continue reading about St. Celestine I