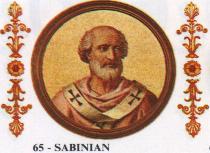 Born in Tuscany, Sabinian served as Gregory the Great's envoy to Constantinople from 593-595. Gregory recalled him because he felt his representative was not firm enough with Patriarch John IV the Faster, who had begun to call himself the Ecumenical Patriarch. Sabinian succeeded Gregory as pope in 604 but had to wait six months for imperial approval before being consecrated. His papacy was marked by a famine, during which he sold grain to alleviate hunger, and by threats of invasion from the Lombards. When Sabinian died in 606, a mob blocked his funeral procession, which went around the city walls to St. Peter's.