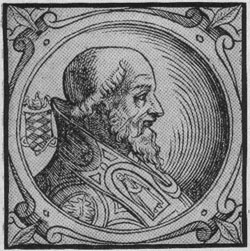 A favorite of Holy Roman Emperor Henry III, Victor was born Gebhard of Dollnsten-Hirschberg c. 1018 in Swabia. In 1042, he become the bishop of Eichstätt, and in the early 1050's, Henry appointed him chancellor. Victor, whom Henry nominated, was elected pope in 1055, and in the same year, Henry named him Duke of Spoleto and Count of Fermo. When Henry died the following year, Victor was given care of Henry's son, whom he crowned emperor with Queen Agnes as regent. Victor died in 1057.