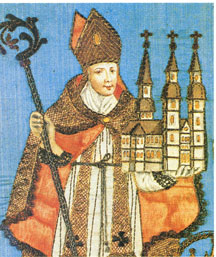 One of the most learned men of his time, St. Vergil of Salzburg (fl. VIII Century) was born in Ireland and undertook a journey to Europe in 743. He spent two years at the court of Pepin the Short and travelled to Bavaria to make peace between the French king and Duke Odilo. Odilo appointed Vergil abbot of St. Peter's, and St. Boniface of Mainz twice complained to Pope Zachary of Vergil's "unorthodox" views. In the first matter, a question of baptismal validity, the pope sided with Vergil and agreed that baptisms are valid even if the priest mispronounces the formula. In the second, the pope censured Vergil, who may have written a cosmology under the name of Ćthicus Ister, for believing that people exist in the Antipodes but took no drastic action. In 767, Vergil was appointed Bishop of Salzburg, where he dedicated the first cathedral. He translated the relics of St. Rupert to the cathedral, where he may also have translated relics of St. Samthann and of St. Bridget of Ireland. Vergil established monasteries in his diocese and sent missionaries to Carinthia and Styria. The Apostle to the Slovenes, Vergil was canonied in 1233 by Gregory IX.