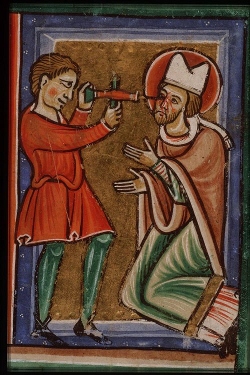 Leger was raised at the court of King Clotaire II and by his uncle, Bishop Didon of Poitiers. Leger was made archdeacon by Didon, was ordained, and in about 651, became abbot of Maxentius Abbey, where he introduced the Rule of St. Benedict. He served Queen Regent St. Bathildis and helped her govern when Clovis II died in 656, and was named bishop of Autun in 663. He reconciled the differing factions that had torn the See apart, introduced reforms, fortified the town, and was known for his concern for the poor. On the death of Clotaire III, he supported young Childeric II for King against his brother Thierry, who had been backed by Ebroin, mayor of the palace. Ebroin was exiled to Luxeuil and became a bitter enemy of Leger, who became Childeric's adviser. When Leger denounced the marriage of Childeric to his uncle's daughter, he also incurred the enmity of Childeric, and in 675 Leger was arrested at Autun and banished to Luxeuil. When Childeric was murdered in 675, his successor, Theodoric III, restored Leger to his See. Ebroin was also restored as mayor of the palace after he had had the incumbent Leudesius murdered and pursuaded the Duke of Champagne and the bishops of Chalons and Valence to attack Autun. To save the town, Leger surrendered. Ebroin had him blinded, his lips cut off, and his tongue pulled out. Not satisfied, several years, he convinced the King that Childeric had been murdered by Leger and his brother Gerinus. Gerinus was stoned to death, and Leger was tortured and imprisoned at Fecamp Monastery in Normandy. After two years Leger was summoned to a court at Marly by Ebroin, deposed, and executed at Sarcing, Artois, protesting his innocence to the end. Though the Roman Martyrology calls him Blessed and a martyr, there is doubt among many scholars that he is entitled to those honors. His feast day is October 2.

Hi readers, it seems you use Catholic Online a lot; that's great! It's a little awkward to ask, but we need your help. If you have already donated, we sincerely thank you. We're not salespeople, but we depend on donations averaging $14.76 and fewer than 1% of readers give. If you donate just $5.00, the price of your coffee, Catholic Online School could keep thriving. Thank you.
Help Now
Continue reading about St. Leger