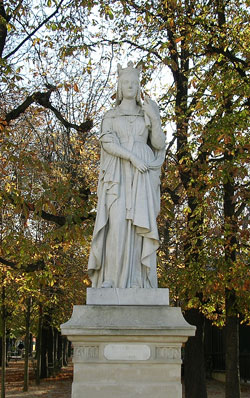 Queen and foundress. She was born in England, where she was enslaved and taken to Neustria, which was part of the Frankish kingdom. In time, Bathildis became a trusted member of King Clovis Il's court and married him in 649. She bore him three sons: Clotaire Ill, Childeric II, and Thierry Ill, all of whom became kings. When Clovis died in 657, Bathildis served as regent for Clotaire III. She had founded a Benedictine convent at Chelles, as well as St. Denis Monastery and Corbie. When Clotaire III assumed the throne, Bathildis retired to Chelles, where she died on January 30.