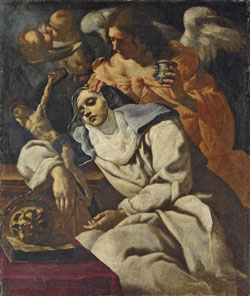 It would be easy to concentrate on the mystical experiences God gave this saint, rather than on her life. In fact, it would be difficult to do differently, so overwhelming were those gifts from God. The temptation for many modern readers (including the author) would be to see little to identify with in these graces and walk away without seeing more. The other temptation would be to become so fascinated with these stories that one would neglect to dig deeper and learn the real lessons of her life.

But Mary Magdalene de Pazzi is not a saint because she received ecstasies and graces from God. Many have received visions, ecstasies, and miracles without becoming holy. She is a saint because of her response to those gifts -- a lifelong struggle to show love and gratitude to the God who gave her those graces.

In fact Mary Magdalene saw her ecstasies as evidence of a great fault in her, not a reward for holiness. She told one fellow sister that God did not give this sister the same graces "because you don't need them in order to serve him." In her eyes, God gave these gifts to those who were too weak to become holy otherwise. That Mary Magdalene received these gifts proved, in her mind, how unworthy she was.

Born in Florence on April 2, 1566, Mary Magdalene (baptized Catherine) was taught mental prayer when she was nine years old at the request of her mother. Her introduction at this age to this form of prayer which involves half an hour of meditation did not seem to be unusual. And yet today we often believe children incapable of all but the simplest rote prayers.

At twelve years old she experienced her first ecstasy while looking at a sunset which left her trembling and speechless.

With this foundation in prayer and in mystical experience, it isn't surprising that she wanted to enter a contemplative monastery of the Carmelite Order. She chose the monastery of St. Mary's of the Angels because the nuns took daily Communion, unusual at the time.

In 1583 she had her second mystical experience when the other nuns saw her weeping before the crucifix as she said, "O Love, you are neither known nor loved."

Mary Magdalene's life is a contradiction of our instinctive thought that joy only comes from avoiding suffering. A month after being refused early religious profession, she was refused she fell deathly ill. Fearing for her life the convent had her professed from a stretcher at the altar. After that she experienced forty days of ecstasies that coexisted with her suffering. Joy from the graces God gave were mixed with agony as her illness grew worse. In one of her experiences Jesus took her heart and hid it in his own, telling her he "would not return it until it is wholly pure and filled with pure love." She didn't recover from her illness until told to ask for the intercession of Blessed Mary Bagnesi over three months later.

What her experiences and prayer had given her was a familiar, personal relationship with Jesus. Her conversations with Jesus often take on a teasing, bantering tone that shocks those who have a formal, fearful image of God. For example, at the end of her forty days of graces, Jesus offered her a crown of flowers or a crown of thorns. No matter how often she chose the crown of thorns, Jesus kept teasingly pushing the crown of flowers to her. When he accused her, "I called and you didn't care," she answered back, "You didn't call loudly enough" and told him to shout his love.

She learned to regret the insistence on the crown of thorns. We might think it is easy to be holy if God is talking to you every day but few of us could remain on the path with the five year trial that followed her first ecstasies. Before this trial, Jesus told her, "I will take away not the grace but the feeling of grace. Though I will seem to leave you I will be closer to you." This was easy for her to accept in the midst of ecstasy but, as she said later, she hadn't experienced it yet. At the age of nineteen she started five years of dryness and desolation in which she was repelled by prayer and tempted by everything. She referred to her heart as a pitch-dark room with only a feeble light shining that only made the darkness deeper. She was so depressed she was found twice close to suicide. All she could do to fight back was to hold onto prayer, penance, and serving others even when it appeared to do no good.

Her lifelong devotion to Pentecost can be easily understood because her trial ended in ecstasy in 1590. At this time she could have asked for any gifts but she wanted two in particular: to look on any neighbor as good and holy without judgment and to always have God's presence before her.

Far from enjoying the attention her mystical experiences brought her, she was embarrassed by it. For all her days, she wanted a hidden life and tried everything she could to achieve it. When God commanded her to go barefoot as part of her penance and she could not walk with shoes, she simply cut the soles out of her shoes so no one would see her as different from the other nuns. If she felt an ecstasy coming on, she would hurry to finish her work and go back to her room. She learned to see the notoriety as part of God's will. When teaching a novice to accept God's will, she told her, "I wanted a hidden life but, see, God wanted something quite different for me."

Some still might think it was easy for her to be holy with all the help from God. Yet when she was asked once why she was weeping before the cross, she answered that she had to force herself to do something right that she didn't want to do. It's true that when a sister criticized her for acting so different, she thanked her, "May God reward you! You have never spoken truer words!" but she told others it hurt her quite a bit to be nice to someone who insulted her.

Mary Magdalene was no pale, shrinking flower. Her wisdom and love led to her appointment to many important positions at the convent including mistress of novices. She did not hesitate to be blunt in guiding the women under her care when their spiritual life was at stake. When one of the novices asked permission to pretend to be impatient so the other novices would not respect her so much, Mary Magdalene's answer shook this novice out of this false humility: "What you want to pretend to be, you already are in the eyes of the novices. They don't respect you nearly as much as you like to think."

Mary Magdalene's life offers a great challenge to all those who think that the best penance comes from fasting and physical discomfort. Though she fasted and wore old clothes, she chose the most difficult penance of all by pretending to like the things she didn't like. Not only is this a penance most of us would shrink from but, by her acting like she enjoyed it, no one knew she was doing this great penance!

In 1604, headaches and paralyzation confined her to bed. Her nerves were so sensitive that she could not be touched without agonizing pain. Ever humble, she took the fact that her prayers were not granted as a sure sign that God's will was being done. For three years she suffered, before dying on May 25, 1607 at the age of forty-one.

To find out more about the Carmelites visit the following sites:

Saint Mary Magdalene de Pazzi, pray that we will make a commitment to seek the presence of God in prayer the way you did. Guide us to see the graces God gives us as gifts not rewards and to respond with gratitude and humility, not pride and selfishness. Amen 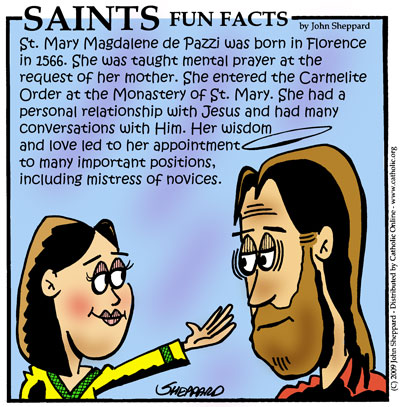