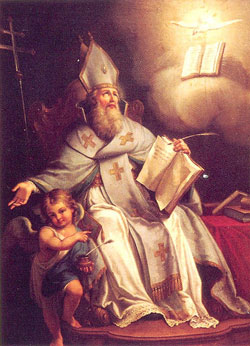 Isaac the Great whose feast day is September 9 became a monk. He was the son of Catholicos  St. Nerses I of Armenia. He studied at Constantinople, married, and on the early death of his wife became a monk. He was appointed Catholicos of Armenia in 390 and secured from Constantinople recognition of the metropolitan rights of the Armenian Church, thus terminating its long dependence on the Church of Caesarea in Cappodocia. He at once began to reform the Armenian Church. He ended the practice of married bishops, enforced Byzantine canon law, encouraged monasticism, built churches and schools, and fought Persian paganism. He supported St. Mesrop in his creation of an rmenian alphabet, helped to promote the translation of the Bible and the works of the Greek and Syrian doctors into Armenian, and was responsible for establishing a national liturgy and the beginnings of Armenian literature. He was driven into retirement in 428 when the Persians conquered part of his territory but returned at an advanced age to rule again from his See at Ashtishat, where he died in the year 439. He was the founder of the Armenian Church and is sometimes called Sahak in Armenia.