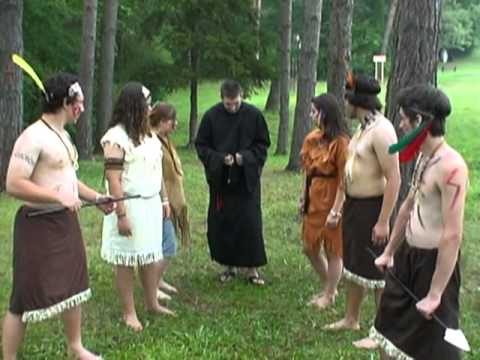 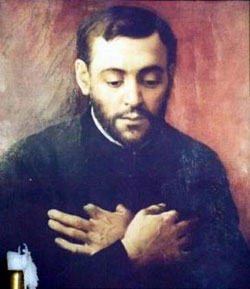 In 1642 the Huron country was in great distress. Harvests were poor, sickness abounded, and clothing was scarce. Quebec was the only source of supplies, and Isaac Jogues was chosen to lead an expedition. It reached its objective safely and started back well supplied with goods for the mission, but the Iroquois, the bitter enemies of the Hurons, and fiercest of all Indian tribes, were on the war-path and ambushed the returning expedition. The story of the ill-treatment and torture of the captives cannot be told here. Suffice it to say that Jogues and his assistant, Rene Goupil, besides being beaten to the ground and assailed several times with knotted sticks and fists, had their hair, beards and nails torn off and their forefingers bitten through. What grieved them far more, was the cruelty practiced on their Christian converts. The first of all the martyrs to suffer death was Rene Goupil, who was tomahawked on September 29, 1642, for having made the Sign of the Cross on the brow of some children. This Rene Goupil was a remarkable man. He had tried hard to be a Jesuit and had even entered the Novitiate, but his health forced him to give up the attempt. He then studied surgery and found his way to Canada, where he offered his services to the missionaries, whose fortitude he emulated. Rene Goupil is one of the North American martyrs who died at the hands of the Indians between the years 1642-1649. Their feast day is October 19.