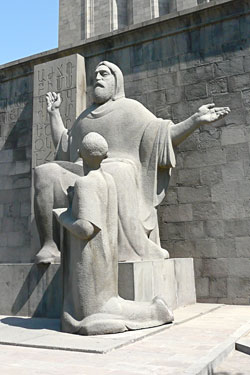 Confessor and disciple of St. Nerses the Great of Armenia, called "the Teacher." Mesrop was born in Taron, Armenia, and became a hermit under St. Nerses the Great. He served as a missionary with St. Isaac the Great and helped compose the Armenian alphabet and translations of the Holy Scriptures. Mesrop, sometimes listed as Mesrob, was proficient in Greek, Syriac, and Persian. He founded schools in Armenia and Georgia, and reportedly succeeded Patriarch Sahak in 440. Mesrop was beloved for his many contributions to Armenian education and died at Valarshapat on February 19 at age eighty.