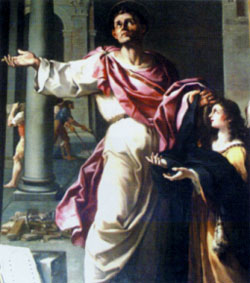 Of the Furii family, Pammachius was a Roman senator and a friend of St. Jerome. Pammachius married St. Paula's daughter Paulina in 385. His denunciation to Pope St. Siricius of Jovinian, who was later condemned at a synod at Rome, and by St. Ambrose at Milan, caused Jerome to write a treatise against Jovinian's teachings that Pammachius criticized, which led to two more letters from Jerome defending his treatise. Paulina died in 397, and Pammachius devoted the rest of his life to study and charitable works. With Fabiola he built a hospice at Porto for poor and sick pilgrims coming to Rome (the first such in the West) and had a church in his house (a site now occupied by the Passionists' SS. Peter and Paul Church). He often tried unsuccessfully, to tone down the polemics of some of Jerome's controversial treatises and particularly the bitterness of Jerome's controversy with Rufinus. Pammachius urged Jerome to translate Origen's DE PRINCIPIIS, and Pammachius' letter to tenants on his estate in Numidia in 401 to abandon Donatism evoked a letter of thanks from St. Augustine. Pammachius died in Rome. His feast day is August 30.