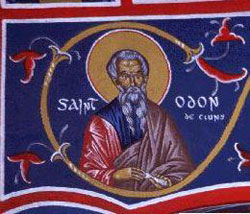 Odo was born near Le Mans, France. He was raised in the households of Count Fulk II of Anjou and Duke William of Aquitaine, received the tonsure when he was nineteen, received a canonry at St. Martin's in Tours, and then spent several years studying at Paris, particularly music, under Remigius of Auxerre. Odo became a monk under Berno at Baume-les-Messieurs near Besancon in 909, was named director of the Baume Monastery school by Berno, who became abbot of the newly founded Cluny, and in 924 was named abbot of Baume. He succeeded Berno as second abbot of Cluny in 927, continued Berno's work of reforming abbeys from Cluny, and in 931 was authorized by Pope John XI to reform the monasteries of northern France and Italy. Odo was called to Rome by Pope Leo VII in 936 to arrange peace between Alberic of Rome and Hugh of Provence, who was besieging the city, and succeeded temporarily by negotiating a marriage between Alberic and Hugh's daughter; Odo returned to Rome twice in the next six years to reconcile Alberic and Hugh. Odo spread Cluny's influence to monasteries all over Europe, encountering and overcoming much opposition, and successfully persuaded secular rulers to relinquish control of monasteries they had been illegally controlling. He died at Tours on the way back to Rome on November 18. He wrote hymns, treatises on morality, an epic poem on the Redemption, and a life of St. Gerald of Aurillac. His feast day is November 18th.