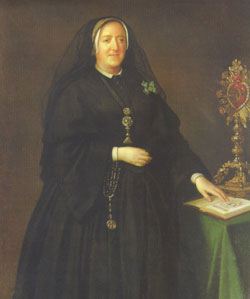 This Spanish Lady was born in Madrid in 1809, lost her mother in childhood, and resisted all attempts to persuade her to marry; she lived with her brother for some years while he was Spanish ambassador at Paris and Brussels. All her interest was given to the religious instruction of the ignorant, the rescue of the unprotected and the fallen, and the relief of sickness and poverty. When she returned to Spain she started more than one organization for work of this kind; her most lasting achievement was the foundation of the congregation of Handmaids of the Blessed Sacrament and of Charity, of which she was elected Mother General in 1859. Its work is for women of the streets. This Institute was approved by the Holy See for five years in the lifetime of its foundress, and shortly after her death it obtained permanent recognition. It had in the meantime spread widely and was full of promise for the future. In 1865 in connection with this final approbation Mother Michaela had set out on her way to Rome, when an epidemic of cholera broke out in Valencia. She hastened to the help of her religious daughters, who were attending the plague-stricken. But though she had more than once in previous outbreaks attended cholera patients, she took the infection herself and died, a victim of charity on August 24th. She was canonized in 1934. Her feast day is August 25th.