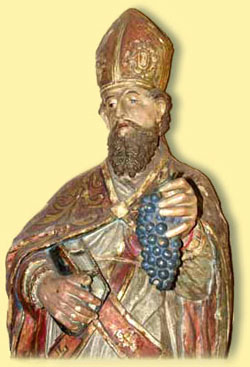 St. Urban Pope and Martyr May 25     He succeeded St. Calixtus in the year 223, the third of the emperor Alexander, and sat seven years. Though the church enjoyed peace under that mild reign, this was frequently disturbed by local persecutions raised by the people or governors. In the acts of St. Cecily, this zealous pope is said to have encouraged the martyrs, and converted many idolaters. He is styled a martyr in the sacramentary of St. Gregory, in the Martyrology of St. Jerome published by Florentinius, and in the Greek liturgy. It appears from Fortunatus, and several ancient missals, that the festival of St. Urban was celebrated in France with particular devotion in the sixth age. A very old church stood on the Appian road, dedicated to God in honor of this saint near the place where he was first interred in the cemetery of Praetextatus His body was there found, together with those of SS. Cecily, Tiburtius, and Valerian, in 821, and translated by pope Paschal into the church of St Cecily. Papebroke shows that it is the body of another martyr of the same name, famous in ancient records, which Nicholas I. sent, in 862, to the monks of St. Germanus of Auxerre, and which now adorns the monastery of Saint Urban, in the diocese of Challons on the Marne, near Joinville it is exposed in a silver shrine. See Tillemont, t. 3, p. 258.