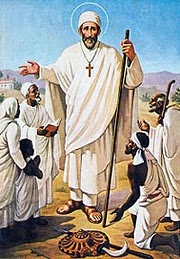 Justin was born at San Fele, Italy on October 9th. He was taken to Naples when a child by his parents, joined the Vincentians when 18, and was ordained. After helping found a Vincentian house at Monopoly, he served as superior at Lecce and in 1839 was sent as the first prefect and vicar apostolic to the new Catholic mission at Adua, Ethiopia. His efforts to evangelize met with great opposition, but in 1841 he was included in a delegation of Ethiopian prelates to Cairo to request the Coptic patriarch of Alexandria to appoint one of his monks Abuna (patriarch) of the Ethiopian church. In Cairo, the patriarch denounced the presence of Father de Jacobis on the delegation and intrigued to a point one Salama as Abuna. Some of the delegation then accompanied Father de Jacobis to meet the Pope in Rome. On his return, Father de Jacobis founded a college and seminary at Guala, and in 1846 a vicariate apostolic of the Galla was established, with William Massaia as its first bishop. These developments caused Salama to launch an anti-Catholic campaign. The college was closed, Catholicism was proscribed, and bishop Massaia was forced to return to Aidan. In 1848, he secretly consecrated Father de Jacobis, now a fugitive, bishop at Massawa, with authority to administer the sacraments in the Ethiopian rite. By 1853, the new bishop had ordained some twenty Ethiopians, was ministering to 5000 Catholics, and was able to reopen the college. In 1860, Kedaref Kassa became king as Theodore II and in return for the backing he had received from Abuna Salama, launched a persecution of the Catholics. Bishop de Jacobis was arrested and after several month's imprisonment was released and managed to find his way to Halai in southern Eritrea. He spent the rest of his life in missionary work along the Red Sea coast and died in the valley of Alghedien on July 31 of fever he contracted while on a missionary trip. He was canonized by Pope Paul VI in 1975. His feast day is July 31.