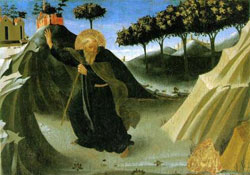 Monastic leader and papal representative, sometimes called Abbo of Fleury and Abbon. He was born in the region of Orléans, France, circa 945, and entered the Benedictine order at Fleury-sur-Loire after studying at Orléans, Paris, and Remis. St. Oswald of Worcester, England, brought Abbo to Ramsey, Huntingdonshrine, England, in 986. Abbo worked with Oswald but was elected abbot of Fleury in 988. This election was contested by a monk with the patronage of the bishop of Orléans and with royal favor. Gerbert, who became Pope Sylvester II in 999, had to resolve the issue, deciding on Abbo. As abbot of Fleury, Abbo attended the Synod of Basel and assisted Pope Gregory V, who had been expelled by the antipope John XVI. Abbo was also instrumental in calming thousands who believed the world would come to a catastrophic end at the start of the year 1000. Monastic affairs were also in turmoil in that era. In 1004, Abbo tried to reform the monastery of La Reole, in Gascony, France. He was caught in a severe confrontation between competing groups and was stabbed. He died as a result of his wound on November 13. Abbo was noted as a philosopher and scholar, especially in the fields of astronomy and mathematics, and wrote a life of St. Edmund.