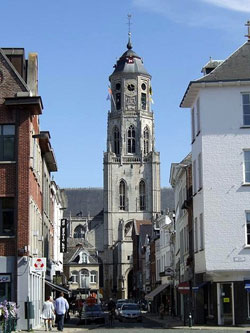 Gummarus was a son of the lord of Emblem, near Lierre in Brabant. He grew up without learning to read or write, but served at the court of Pepin, where from a spirit of religion he was faithful in every duty and liberal in owrks of mercy. Pepin raised hinm to a high post, and proposed a match between him and a lady of good birth named Guinimaria, and the marriage was solemnized with their mutual consent. This marriage, which seemed unhappy in the eyes of the world, was directed by God to perfect the virtue of His servant and exalt him to the glory of saints: for Guinimaria was extravagant and perverse in her ways, cruel, capricious and altogether unteachable. Life became from that time a train of continual trials for Gummarus. St. Gummarus for several years endeavoured by all means which prudence and charity could suggest to encourage his wife to ways more agreeable to reason and religion. Then he was called upon by King Pepin to attend him in his wars, and he was absent eight years. Returning home, he found his wife had thrown all things into disorder, and that few among his servants, vassals or tenants had escaped her oppression. She was so mean that she even refused beer to the reapers at harvest. Gummarus made to every one of them full restitution and satisfaction; and Guinimaria was so far overcome by his patience and kindness as to be ashamed of her past conduct, and to seem penitent. This change, however, was only exterior, and her wilfulness broke out again worse than ever. Gummarus tried to reclaim her: but at length he gave up the attempt and lived a retired life. With St. Romuold he is said to have founded the abbey at Lierre which afterwards bore his name. His feast day is October 11th.