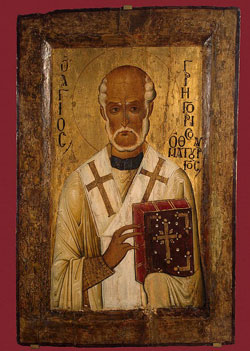 Gregory was of a distinguished pagan family. He was born at Neocaesarea, Pontus, and studied law there. About 233, he and his brother, Athenodorus, accompanied his sister, who was joining her husband in Caesarea, Palestine, while they continued on to Beirut to continue their law studies. They met Origen and instead of going to Beirut, entered his school at Caesarea, studied theology, were converted to Christianity by Origen, and became his disciples. Gregory returned to Neocaesarea about 238, intending to practice law, but was elected bishop by the seventeen Christians of the city. It soon became apparent that he was gifted with remarkable powers. He preached eloquently, made so many converts he was able to build a church, and soon was so reknowned for his miracles that he was surnamed Thaumaturgus (the wonderworker). He was a much-sought-after arbiter for his wisdom and legal knowledge and ability, advised his flock to go into hiding when Decius' persecution of the Christians broke out in 250, and fled to the desert with his deacon. On his return, he ministered to his flock when plague struck his See and when the Goths devastated Pontus, 252-254, which he described in his "Canonical Letter." He participated in the synod of Antioch, 264-265, against Samosata, and fought sabellianism and Tritheism. It is reported that at his death at Neocaesarea, only seventeen unbelievers were left in the city. He is invoked against floods and earthquakes (at one time he reportedly stopped the flooding Lycus, and at another, he moved a mountain). According to Gregory of Nyssa, Gregory Thaumaturgus experienced a vision of Our Lady, the first such recorded vision. He wrote a panegyric to Origen, a treatise on the Creed, and a dissertation addressed to Theopompus; St. Gregory of Nyssa wrote a panegyric to Gregory Thaumaturgus. His feast day is November 17th.

Hi readers, it seems you use Catholic Online a lot; that's great! It's a little awkward to ask, but we need your help. If you have already donated, we sincerely thank you. We're not salespeople, but we depend on donations averaging $14.76 and fewer than 1% of readers give. If you donate just $5.00, the price of your coffee, Catholic Online School could keep thriving. Thank you.
Help Now
Continue reading about St. Gregory Thaumaturgus