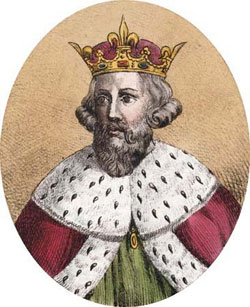 Benedictine abbot also called Grimwald, invited to England by King Alfred in 885. Grimbald arrived in England and declined the see of Canterbury, preferring to remain a monk. He became the abbot of New Minster Abbey at Winchester appointed by King Edward the Elder. Grimbald is credited with restoring learning to England.