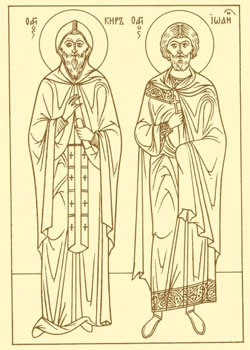 St. Cyrus was an Alexandrian doctor who used his calling to convert many of his patients to Christianity. He joined an Arabian physician named John in encouraging Athanasia and her three daughters to remain constant in their faith under torture at Canopus, Egypt. They ere both seized and tortured, and then all six were beheaded. His feast day is January 31.