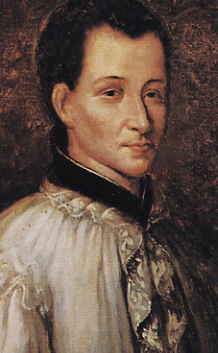 St. Claud is said to have been born in Franche-Comte', of a senatorial family, and after his ordination he became one of the clergy of Besancon. According to the generally accepted tradition, he retired twelve years later to the monastery of Condate, or, as it is now called, Saint-Claude, in the Jura mountains, where he lived a most holy and austere life. Raised to the position of Abbot, he introduced or enforced the Rule of St. Benedict and restored the monastic buildings. In 685 he was chosen Bishop of Besancon. He was, by all accounts, already an old man and most unwilling to accept the dignity. Nevertheless, he ruled the diocese wisely and well for seven years. He then resigned and went back to Condate, the direction of which he had retained during his episcopate. He died in 699, at a very advanced age. Another tradition represents St. Claud as having remained a secular priest until his elevation to the episcopate, and only to have retired to the monastery after vacating his office. The cultus of St. Claud became widespread in the twelfth century when his body was discovered to be incorrupt. His burial place was for centuries a favorite place of pilgrimage at which miraculous cures took place. His feast day is June 6th.