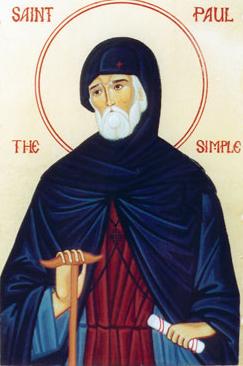 Paul spent his first sixty years in the world, employed as a laborer. He then suffered the ordeal of discovering that his wife had committed adultery. Thereafter, Paul withdrew into the Egyptian desert in the hope of becoming a hermit under the tutelage of Saint Anthony the Abbot. Upon seeing this aged would-be disciple at his door, Anthony judged him to be ill suited to eremitical life, and refused to receive him. But Paul refused to leave. Anthony thereupon decided to test Paul's virtue by commanding him to carry out a series of difficult tasks, including a very prolonged regimen of continuous prayer, the sewing of mats that he was then instructed to take apart and sew all over again, and very strict fasting. Paul proved himself to be unwavering in obedience and perseverance, winning Anthony's confidence and admiration. Anthony was later to say of Paul, "How this monk puts us all to shame! He immediately obeys man's simplest order, while we often fail to listen to the word which comes to us from heaven." Paul lived his remaining years in great humility and childlike simplicity.
Continue reading about St. Paul the Simple