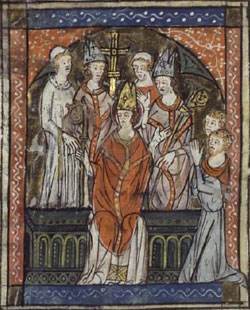 Vaast was leading the hidden life of a hermit in Toul, France when the bishop of the city, discovering the young man's virtues, resolved to ordain him to the priesthood. In 496, as the Frankish pagan king Clovis I was passing through Toul, he asked to be provided with a priest to begin instructing him in the Christian faith. Vaast was chosen for this important task, and joined the king's retinue on their journey toward Reims. As they were crossing the Aisne River, a blind man on the bridge begged Vaast to heal him. Vaast thereupon prayed for the man and made the sign of the cross on his eyes. Immediately, the man's eyesight was restored. This miracle confirmed Clovis in his decision to become a Christian. In Reims, Clovis was baptized by the city's bishop, Saint Remigius, who upon meeting Vaast recruited him for his diocese. Thereafter, Vaast was consecrated bishop of the city of Arras, where he encountered a populace that had abandoned the Christian faith. Vaast succeeded in restoring Christianity to this region. He is said to have rescued a poor family's goose from the jaws of a wolf that had seized it.
Continue reading about St. Vedast