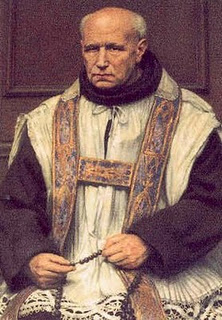 Valentin Paquay, of Tongres, Belgium, entered the Franciscan Order of Friars Minor at the age of twenty-one. Following his ordination to the priesthood at the age of twenty-five, he spent the rest of his life at his order's friary in Hasselt. Deep humility and great devotion to the Mass and to the Sacred Heart of Jesus characterized Father Valentin's spiritual life. The veneration given to the Mother of God in the parish church he had attended as a child had engendered in him a profound love for the Blessed Virgin Mary that during his Franciscan years ripened into a special devotion to her under the title of the Immaculate Conception. Father Valentin zealously dedicated himself to constant preaching and the hearing of confessions. His wisdom in discerning the secrets of the soul prompted penitents from far away to journey to his confessional. Father Valentin was also a fervent advocate of the frequent reception of Holy Communion. He died on January 1, 1905.
Continue reading about Bl. Valentin Paquay