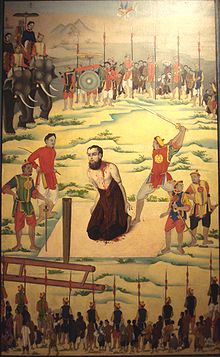 The reading of a devotional book prompted the seventeen-year-old Pierre-Francois Neron, of Bornay, France, to turn his thoughts to the service of God. As a parish sacristan, he spent whole nights praying in church. Inspired by accounts of missionaries he had read in the Annals of the Society for the Propagation of the Faith, Pierre became a priest of the Paris Society for Foreign Missions at the age of twenty-nine. Before setting out for the missions in Vietnam, he visited the French shrine of Our Lady of Victories in Bourmont to pray for the grace of martyrdom. After reaching Vietnam in 1849, he spent eleven years in the missions, motivated by the intent "to give the last drop of my blood to procure for God the homage of every single creature." Amid his labors, he recited each evening the Stations of the Cross. Following his capture by agents of the pagan emperor Tu-Duc, Father Neron was imprisoned in a cage for three months before suffering beheading. The news of Father Neron's martyrdom so grieved his mother that she was stricken with paralysis at the end of a Mass for her son. She died two years later.
Continue reading about St. Pierre-Francois Neron