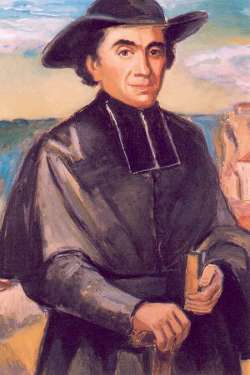 Pierre Bonhomme (1803-1861), Founder of the Congregation of the Sisters of Our Lady of Calvary. He was born on 4 July 1803 in Gramat, France. As a child, Pierre showed an inclination for study, a deep piety, and generousity to his parents and sister. He felt called to be a priest from an early age and was attracted to a life of simplicity and poverty.

He completed his studies at the Royal College and entered the major seminary of Cahors in November 1818. On 23 December 1827 he was ordained a priest. From that time, he demonstrated an extraordinary ability to help others, both spiritually and materially. While still a deacon, he opened an elementary and middle school for boys. In 1831 he opened a school to prepare students for the major seminary. He also founded the spiritual group "Children of Mary" for young girls in Gramat, convinced of the need to give youth both human and spiritual guidance when there was nothing else of the kind for them in the area.

Shortly after his appointment as parish priest of Gramat, Fr Bonhomme came into contact with the wretchedness and neglect suffered by so many of the poor, elderly and sick. He longed to help them and was undaunted by the scarcity of the available means. He urged "his young people" to visit them, bringing material aid and spiritual comfort. A little later, Fr Bonhomme received permission to establish a home for the needy. He understood that to run this charitable institution a religious congregation was indispensable, and that its members must be women who would give all of themselves for the good of the poor and the suffering. He believed that the young members of the "Daughters of Mary", so generous in the gift of themselves and in love for God, might have this vocation. It was this that inspired Fr Bonhomme to found the Congregation of the Sisters of Our Lady of Calvary in Gramat. They were dedicated to educating children and to providing assistance to the poor, sick, elderly, deaf-mutes and the seriously mentally and physically disabled.

Hortense and Adčle Pradel and Cora and Mathilde Roussot, all of whom lived in Gramat, became the first members. They felt called to be consecrated to God in his service, and began their formation under Fr Bonhomme and at several religious institutes in Cahors.

Fr Bonhomme continued his parish activity and was known for the many missions he preached in nearby Lot and Tarn-et-Garonne. He acquired a reputation as a gifted preacher, converting many and attracting other young women to his newly-founded congregation. Scorching heat and bitter cold did not deter him from preaching with the same zeal to save souls. He had a special devotion to Our Lady of Rocamadour, in Gramat, and through her sought the strength and inspiration he needed. On one occasion, while preaching a retreat he completely lost his voice. It was through prayer to Our Lady of Rocamadour that he received a miraculous cure, recovered his voice and was able to go on speaking.

In 1836, Fr Bonhomme made a brief retreat in the Trappist monastery of Mortagne, feeling the need to discern God's will for him in deeper prayer and reflection. He felt a growing desire to become a Carmelite, and to found a Carmelite community in Gramat. However, the Bishop of Cahors did not accept this proposal and encouraged him to continue his missionary activities and to collaborate with the group of newly-established diocesan missionaries in Rocamadour. Fr Bonhomme obeyed and threw himself into this new project with all his energy and enthusiasm.

In 1848, during a mission in Lot, Fr Bonhomme was once again unable to speak; but this time he was obliged to give up preaching and a disease of the larynx was diagnosed. The priest did not despair; he trusted in God's providence and believed that this would afford him the opportunity to dedicate himself to the flourishing congregation he had founded; it already had 61 religious members in various communities in the rural parishes who were dedicated to educating children and caring for the sick. In 1844, Fr Bonhomme sent a community to serve a psychiatric hospital in Leyme and paid frequent visits to "his daughters" there to encourage them in their difficult mission. In 1856, he opened another community in Paris, dedicated to serving "mentally ill, convalescent poor" persons.

His own disability, due to the disease that deprived him of his voice, made him particularly sensitive to the disabled, especially deaf-mutes. In 1854 he opened a school for deaf-mute children in Mayrinhac-Lentour, Lot, and in 1856 he sent sisters to Paris to found a home for deaf-mutes.

In his last years, Fr Bonhomme devoted all his time and energy to forming the sisters and to writing the Rule of his institute which he put under the protection of Our Lady of Calvary, who became Mother and Model of the Congregation.

Fr Bonhomme died in Gramat on 9 September 1861. Today the Congregation of the Sisters of Our Lady of Calvary consists of 250 religious who work in France, Brazil, Argentina, Guinea, Ivory Coast and the Philippines.