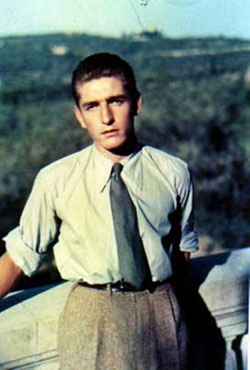 The mother of Alberto Marvelli, of Ferrara, Italy, set for her son an exceptional example of charity to the poor. More than once, when Alberto had sat down to his dinner, half of his meal would suddenly be carried away from the table by his mother to feed a pauper at the door. She would tell her son, "Jesus has come, and he is hungry." As a teenager, Alberto observed a daily schedule of spiritual exercises, including half an hour of meditation, half an hour of spiritual reading, attendance at Mass, recitation of the rosary, and the recitation of the Angelus at noon. A frequent communicant, he went to confession weekly. At the age of eighteen, Alberto became president of a local chapter of the Catholic Action lay apostolate. After graduating from Bologna University with an engineering degree, he became a high school teacher. An avid bicycler, he used his bike to carry donations to the poor. During World War II, Alberto rescued those being deported by the Nazis to concentration camps by breaking open the locked rail cars to let the prisoners free. On October 5, 1946, while riding his bicycle, Alberto was struck and killed in a traffic accident.
Continue reading about Bl. Alberto Marvelli