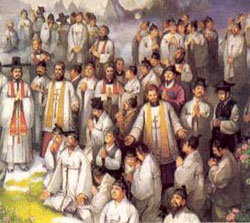 Following the conversion of their family to the Catholic faith, Columba Kim Hyo-im, a native of Pam-som, Korea, and her two sisters Agnes and Clare consecrated their virginity to God. The three girls lived in the home of their brother Anthony. In 1839, as the persecution of Korea's Catholics continued, Columba and her younger sister (Saint) Agnes were brought before a pagan police commissioner. Upon being asked why they weren't married, Columba answered, "In order to cherish our body and heart in all purity, to serve and worship God, our supreme King and Father, Creator of heaven and earth, of spirits, mankind, and everything that exists, and to be able by this means to save our souls." Upon refusing to apostatize, Columba was tortured in various ways, including the burning of her skin with hot coals. Only about five days after this ordeal, the burn-wounds inexplicably healed so completely that her captors attributed the apparent miracle to an evil spirit. On September 26, Columba was beheaded for her faith, three and a half weeks after her sister Agnes had suffered the same fate.