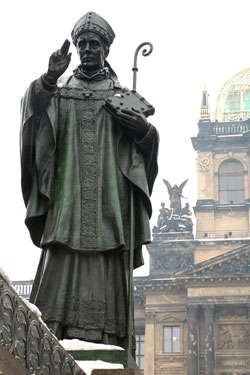 The first bishop of Prague to have been born in Bohemia, St. Wojciech was born Voytech c. 956 into a noble family. He was sent to Magdeburg to be educated and took the name of his catechist when he was baptized. After the death of his mentor in 981, Wojciech, who had grand visions of missionary work and clerical reform, returned to Prague, and in the following year, he became the second bishop of Prague. Conflict developed between the bishop and the duke of Bohemia, Boleslaus II, and in 990, Wojciech travelled to Rome, where he became a monk. John XV ordered him back to Prague two years later, and Gregory V released him from his episcopal duties in 995, after the massacre, at the order of Boleslaus, of Wojciech's family at Libice. During these five years in Prague, Wojciech founded the abbey of Brevnov. Boleslaus I, duke of Poland, invited him to evangelize the Prussians of Pomerania; Wojciech was killed on the suspicion of being a Polish spy. Boleslaus I buried Wojciech's body at Gniezno, Poland, whence it was transported in 1039 to Prague. Wojciech was canonized in 999.