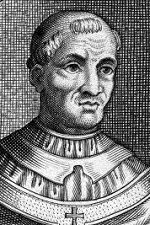 The son of a priest named Leo, John was elected pope in 985 with the support of Count Crescentius II. Six years later, he sent his legate to mediate between King Ethelred II of England and Duke Richard of Normandy, and in 992, he accepted the vassalage of Duke Mieszko I of Poland. John had a falling out with his patron ten years after his election to the see of Rome; the pope fled to Sutri and asked Emperor Otto III to help him. John died in 996 before Otto could do anything for him. John was the first pope to canonize a saint by papal bull, and St. Ulrich of Augsberg was the first saint so canonized.