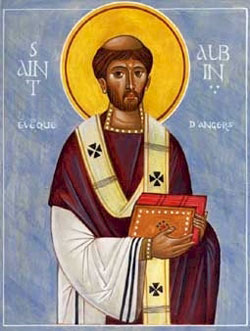 Bishop and miracle worker, also known as Aubin. As a youngster he entered the monastery at Tincilloc, near his hometown of Vannes, in Brittany. When he was thirty five he became an abbot, and was named the bishop of Angers in 529. Albinus was a noted miracle worker during his lifetime and his grave became a popular pilgrimage destination because of the miracles performed there. He showed great generosity to the sick and poor. He ransomed slaves whenever possible and cared for them.