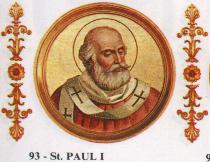 Pope from 757-767. The brother of Pope Stephen 11 and a Roman, he was educated in the Lateran Palace, became a deacon under Pope Zachary, and wielded considerable influence in his brother's administration. Elected to succeed Stephen, he took as his primary concern the threat posed to Rome and the Papal States by the Lombards. Paul secured an alliance with the Frankish king Pepin the Short, thereby cementing the relationship between the Holy See and the Frankish Empire which culminated with the historically significant alliance between Pope Leo III and Charlemagne. Paul also opposed the Iconoclast policies of the Byzantine emperor Constantine V, thereby exacerbating further the deteriorating relationship between the papacy and the Byzantine Empire. He died on June 28 at St. Paul's Outside the Walls, in Rome.