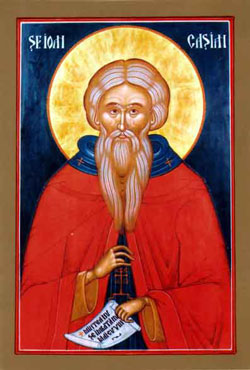 A close friend of St. Paulinus of Nola, St. Nicetas was bishop of Remesiana in Dacia (modern Romania and Yugoslavia) and was noted for his successful missionary activities, especially among the Bessi, a race of marauders, which Paulinus commemorates in a poem. Nicetas wrote several dissertations on faith, the creed, the Trinity, and liturgical singing, and is believed by some scholars to be the author of Te Deum. We know little of Nicetas himself beyond the fact that on at least two occasions, he made his way from a country which Paulinus regarded as a wild region of snow and ice to visit his friend at Nola in Campania. St. Jerome also speaks very appreciatively of his work in converting the people of Dacia, but of the details of his missionary expeditions, the manner of his promotion to the episcopate, or the date of his death, we know nothing. His feast day is June 22nd.