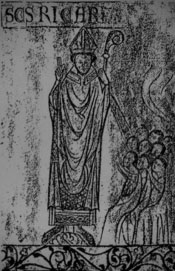 Bishop and leading figure in England during his era, also called Richard de Wyche. Born at Wyche, Worcestershire, England, he was orphaned while a young lad, managed to regain his fortune which had been mismanaged by others, and received an excellent education at Oxford, Paris, and Bologna, Italy. At Oxford, he studied under the famous Robert Grossteste and became friends with St. Edmund Rich. He earned a doctorate in law from the University of Bologna. He was appointed chancellor of Oxford in 1235 and then chancellor to Edmund Rich, who by now was archbishop of Canterbury. After accompanying Edmund into retirement at the Cistercian abbey of Pontigny, France, he departed the community upon Edmund's death, taught at the Dominican house in Orkans, and was ordained there in 1243. Upon going home to England, he was named chancellor to Edmund's successor, St. Boniface of Savoy. When King Henry Ill appointed Ralph Neville to the see of Chichester in 1244, Boniface declared the nomination invalid and named Richard to the post, an act which caused an uproar in the kingdom. Finally, in 1245, Pope Innocent IV found in Richard's favor, but Richard was prevented from entering his palace by the machinations ,of Henry. Only after the king was threatened with excommunication was Richard able to take up his duties. He insisted upon strict adherence to discipline among the clergy, aided the poor, and fearlessly denounced the corruption and vices of the contemporary Church and the royal court. His death came at Dover, in a home for poor priests, while delivering a plea for a crusade. Richard was canonized in 1262, and his tomb became a popular shrine noted for its miracles until the Reformation in England.