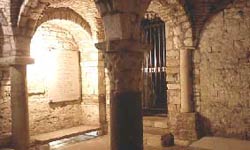 Bishop of Andria, Italy, and patron of that see. He is believed to have been an Englishman appointed to Andria by Pope Adrian IV, who was likewise from England. He attended the third general council of the Lateran in 1719. There was also a legend about an Englishman named Richard who became the first bishop of Andria, appointed by Pope St. Gelasius II.