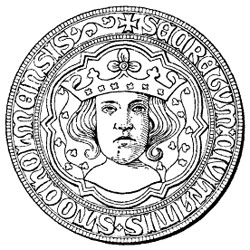 Martyred king of Sweden, the author of the Code of Uppland or King Eric's Law. A devout Christian, Eric spread the faith through out the nation after his crowning in 1150. He campaigned against the pagan Finns and persuaded Bishop Henry of Uppsala, an Englishman, to remain in mis­sionary service in Finland. Eric was slain by Swedish nobles who were allies of Prince Magnus of Denmark. They beheaded him near Uppsala as Magnus' any entered the region. Eric was never officially canonized but is patron of Sweden.