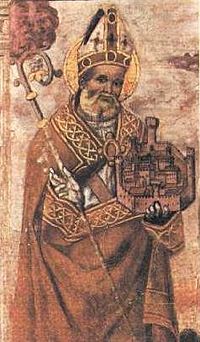 Ubald Baldassini was born of a noble family in Gubbio Italy, was orphaned in his youth, and was educated by his uncle, the Bishop of Gubbio. Ubald was ordained, was named deacon of the cathedral, reformed the canons, and then left a few years later to become a hermit. Dissuaded from the eremitical life by Peter of Rimini, he returned to Gubbio and in 1126, was named Bishop of Perugia but refused the honor. He became Bishop of Gubbio in 1128 and persuaded Emperor Frederick II not to sack Gubbio, as he had Spoleto during one of his forays into Italy. Ill the last two years of his life, Ubald died at Gubbio on May 16, and was canonized in 1192. His feastday is May 16th.