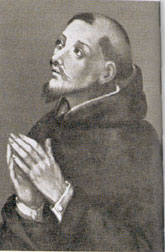 As a priest of the Augustinian Order, Ugolino Zefferini, of Cortona, Italy, was characterized by his great purity and deep devotion to the Blessed Virgin Mary. After having exercised his priestly ministry with great zeal, he spent his later years living in solitude as a hermit. Thirty years after his death, a lily was discovered sprouting from his body over his heart and exuding a celestial fragrance. This lily was soon stolen, but a second lily quickly sprouted in its place. A blind woman experienced a vision of Ugolino telling her that if she went to his tomb and cut the lily, she would receive her eyesight. Obeying this instruction, the woman was in fact healed. Consequently, Ugolino's body was exhumed and found to be incorrupt. When in 1508 the tomb was again opened, the Augustinians' famed prior general, Giles of Viterbo, having seen the body, testified that "his appearance and expression appeared so blessed that it seemed fitting to us that God had glorified him with so many miracles."