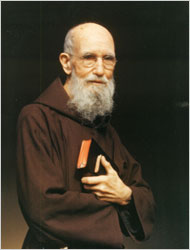 Bernard (Barney) Casey was born in a three room log cabin, near Oak Grove, Wisconsin on November 25, 1875. As a young boy, though he was physically weak, he was strong spiritually. As a teenager, he saved a man from drowning, believing that the help of Our Lady made it possible. As a young man several difficult incidents brought him even closer to God: the ending of a relationship with a girl whom he loved, and being a witness to a murder. Barney decided that he wanted to devote his life to God, as a priest. The next eight years represented a difficult journey towards priesthood. In 1892, Bernard was admitted to a German seminary, but the diocesan officials at the seminary believed he did not have what it takes to be a priest. Due to a language barrier, he did poorly in his classes. Barney went to a Capuchin seminary in 1896, adopting the name of Solanus. At the age of thirty-three, Father Solanus was ordained as a simplex priest, which meant that he could not hear confessions or preach homilies. People waited in lines in order to speak to Father Solanus. They noticed the power of his prayers, a man with great faith in God. Many people contributed to Father Solanus, as the cause of many miracles. Reports of healings and conversions became everyday occurances in the Capuchin house. Even with the pain and suffering he experienced before his death, he thanked God. His last words before dying were: "I give my soul to Jesus". On July 31, 1957, Father Solanus died. As a result of his faith, he was a man who submitted his will to God's will.